Presidential candidate of the People’s Democratic Party (PDP), Atiku Abubakar, and his running mate Ifeanyi Okowa of Delta State were on Wednesday received by a huge crowd of PDP supporters at the Abubakar Tafawa Balewa Stadium in Bauchi.

Atiku, who was visibly elated by the wild jubilation among the crowd, addressed the supporters when he visited the state to receive the 25,000 decampees of other political parties to the PDP. 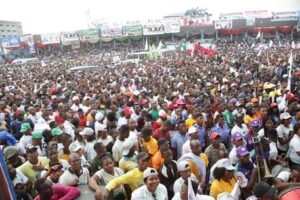 “This is a clear indication that the PDP is controlling Bauchi state and by God’s grace l have no doubt that a larger number of supporters will come to support us when we come to campaign in the state,” he said.

Atiku who was confident that the PDP will cruise to victory in 2023, thanked and welcomed the decampees, which included a former Deputy Governor and the current Speaker of the Stats Assembly who decamped from All Progressives Congress APC to the PDP saying the PDP is a party to beat.

The PDP presidential candidate said the large turnout of supporters in Bauchi from the Abubakar International Airport to the palace of the emir of Bauchi and the stadium was unprecedented and a testimony to the achievements of Governor Bala Mohammed four year rule in the State.

He pledged to return the country’s lost glory if elected as president in 2023 and called on the PDP supporters to reelect governor Mohammed for a second term to continue the good work.

Earlier while welcoming the former Vice President, Governor Bala Mohammed assured him that the state is PDP and 100 percent in support of the Atiku-Okowa ticket.

“We are happy to have you in Bauchi and as you can from the excitement of the multitude that came to welcome you, they are set to vote the PDP from top to bottom and we will work hard to ensure that you become the next president of Nigeria,” he said.

In his remarks, the National Chairman of the PDP, Senator Iyorchia Ayu, called on the people of the state to support the PDP in 2023 as it is the only hope for the current challenges bedeviling the country. The PDP Presidential candidate was received by a mammoth crowd of supporters gathered at the 15,000-capacity Abubakar Tafawa Balewa Stadium, Bauchi.

Atiku was earlier received on arrival at the Sir Abubakar Tafawa Balewa International Airport,
on Wednesday afternoon, by Governor Mohammed.

The former Vice President was in company with his running mate and governor of Delta State, PDP governors of Adamawa, Ahmadu Fintiri of Adamawa State, Aminu Tambuwal of Sokoto State, and Darius Ishaku of Taraba State, among another top echelon of the PFP, including former governors of Jigawa State, Sule Lamido, Gombe Ibrahim Dankwambo, Niger Babangida Aliyu.

The governor of Rivers State, Nyesom Wike, and his counterpart from Oyo, Benue, and Enugu were missing as the rift within the party deepens.

The PDP Presidential candidate, who was received by the governor in the company of PDP heavyweights in the state, including the Chairman, Hamza Akuyam, Senator Abdul Ningi, and several top state and party leaders, has moved to the palace of the Emir of Bauchi, Dr. Rilwanu Adamu for a homage.

The stadium was agog as thousands of supporters both inside and outside expressed great jubilation as they received Atiku and his entourage to Bauchi.