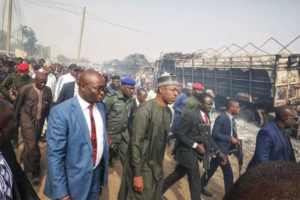 Babagana Zulum, governor of Borno, has accused soldiers of leaving some residents of the state at the mercy of Boko Haram insurgents.

Speaking when he visited Auno, a town 20 kilometres from Maiduguri, Borno state capital, the governor alleged that soldiers meant to secure the community desert the people around 5pm on a daily basis.

At least 30 persons were killed when Boko Haram insurgents attacked travellers in Auno on Sunday night.

Addressing Sunday Igbinomwanhia, garrison commander of Operation Lafiya Dole, at the scene of the incident on Monday, Zulum expressed concern that the army has not established a military base in Auno.

“We have to be brutal in telling the truth. I am pushed to the wall to say the truth. Since I was inaugurated as governor of Borno state, Boko Haram has attacked Auno six times. Another thing is that the military has withdrawn from Auno town,” he said raising his voice.

“I am not undermining the capacity of the military but we have made repeated appeal for the military to establish their unit in Auno. They are here but as soon as it is 5 pm, they close the gate and lock the people and go back to Maiduguri. This is not right.”

The crowd which gathered at the scene cheered the governor as he spoke.

In his response, the army commander said the military is committed to the protection of lives and property in the state.

He said the troops were conducting clearance operation at other locations when the attack happened.

Igbinomwanhia said the military will not deliberately allow the people to be killed by insurgents, urging residents of the community to provide credible information to the troops in order to secure them.

In January, Zulum came down hard on soldiers manning Damaturu-Maiduguri road in the state, over alleged case of extortion at a checkpoint.

He had accused them of exploiting the people they were meant to protect from Boko Haram.

“I’m going to report all of you in this unit… nobody can tolerate this. Boko Haram is attacking people and you are here collecting N1000 per car,” he had shouted at the top of his voice.