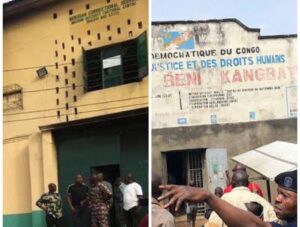 In a year that saw the release of some notorious criminals including French Killer, The Serpent and the exchange of US basketballer Brittney Griner for notorious arms dealer Viktor Bout; 2022 also saw a few prisons breaks that countries are still recovering from.

On Tuesday, July 5, 2022, the Kuje Correctional Centre in Abuja the Capital city of Nigeria was attacked releasing over 600 inmates.

Four inmates, a security guard and several attackers were reportedly killed in the prison attack that night.

Loud explosions and gunfire started the attack at the Kuje medium-security prison.

Defence Minister Bashir Magashi had told reporters that the attacks were most likely carried out by members of the Boko Haram militant groups and 64 of its members escaped.

However, the Islamic State of West Africa (ISWAP) claimed responsibility for the attack revealing that it freed tens of inmates.

The infrastructure, a control room, would help guard against abuse of inmates’ rights and ensure adequate security surveillance of the prisons.

“Inmates can be monitored without any violation of their rights. With this, jailbreaks and riots can be avoided or nipped in the bud,” the minister said.

Six members of Brazil’s largest criminal gang, First Command of the Capital (PCC) members had reportedly broken out of the Paraguay prison on December 20, 2022.

The escapees were said to have gotten out through a hole dug in the ground.

Paraguayan newspaper, ABC reported that the hole in the ground was left after construction work had been carried out and the police were not aware of it.

However, another Paraguayan newspaper, La Tribuna reported that the hole and tunnel used in escaping were dug by the inmates themselves.

The hole through which they escaped led from the prison’s washroom to a tunnel in the exercise yard from which the prisoners escaped by jumping over a fence.

Paraguay’s Justice Minister blamed the escape on the prison authorities’ negligence because “a tunnel like this isn’t built overnight.”

Over 800 inmates reportedly escaped from a prison in Eastern DR Congo after a jailbreak happened on August 9, 2022.

Two policemen were reportedly killed in the attack staged by gunmen at the Kakwangura central prison in Butembo town.

The attackers identified as the Mayi-Mayi are members of Congolese self-defence groups.

A prison source revealed that only 49 of the 872 inmates in the prison remained after the attack.

The Kivu Security Barometer (KST), an organisation observing the area said the ADF was suspected of masterminding the attack.

The Allied Democratic Forces (ADF) group is said to be one of the most deadly ones in the region.

60 inmates escaped after an attack on civilian prison in Burkina Faso on May 7, 2022.

The attack was at the civilian prior in the town of Nouna, in the Kossi province of the Boucle du Mouhoun region of Burkina Faso.

Heavily armed militants reportedly launched an attack on the prison facility overnight in which one person died while all the inmates including a woman escaped.

The attackers were said to have ransacked offices and set motorbikes and prison vehicles ablaze before fleeing.

A resident told local media, “They fired heavy weapons ad the entrance to the town of Nouna before heading to Nouna prison, where they broke the doors and released the detainees.”

Feature: Inside Ethiopian Bodi Tribe Where Men Drink Blood, Milk In Bid To Be Fattest Man