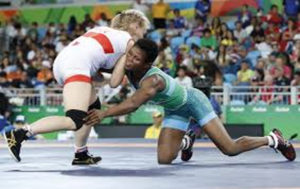 Team Nigeria to the just-ended African Wrestling Championships has delayed its scheduled flight back home from Algeria due to bad weather conditions.

Nigeria had participated in the championships in Algiers where the team won 14 medals and was due back home on Tuesday night.

But it later wrote on its twitter handle @wrestlingngr that the trip would be delayed by another day.

“Our team is stuck in Istanbul. Bad weather forces our flight to Lagos to be cancelled.