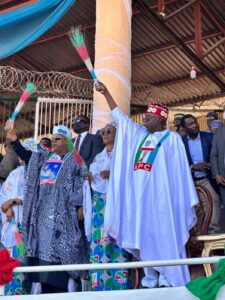 A video capturing the moment the presidential campaign flag-off of the All Progressives Congress (APC), in Jos, Plateau State, was disrupted after angry crowds started throwing banners, posters, placards and stones has surfaced on social media.

iBrandtv reports that the campaign rally was organised to kickstart the campaign of the APC Presidential candidate, Asiwaju Bola Ahmed Tinubu and his running mate, Senator Kashim Shettima.

However, in a viral video that has been spreading like wildfire on the internet, an APC official, addressing the crowd, could be heard pleading with them to stop disrupting the event as they began throwing away banners and posters they came to the venue with.

READ ALSO: “God Has Given You The Opportunity To Succeed In Things I Didn’t”- Peter Obi Replies Soludo

While what led to the incident remains unclear at the time of filing this report, the APC official asked security agents not to beat up the unruly crowd.