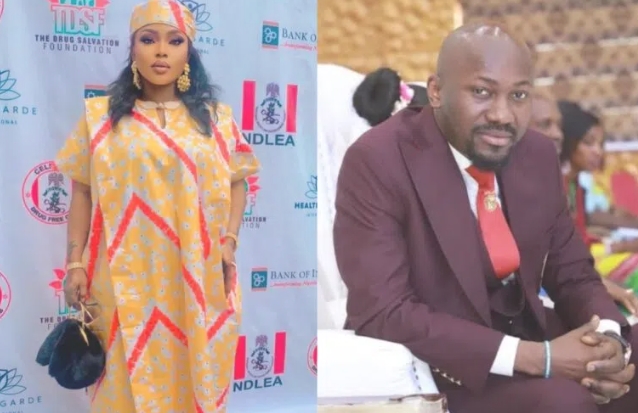 It is no longer news that the duo have been at loggerheads following the revelations Abubakar revealed about their alleged affair to the general public.

Taking to her social media page, Agbor shared a post about her colleague who is reportedly battling a strange illness.

In the message, she said people should stop judging Abubakar, but empathise with her instead.

Shedding more light on why she decided to stand firm behind her colleague, despite how delicate her accusations are, Agbor said she made a post on social media because she had seen Halima Abubakar go through pain.

She said, “I shared the post because I have seen her (Abubakar) go through pain. If those people ‘dragging’ (criticising) her go through the pain, they may not survive it. I shared the post because friends are supposed to support and stand by each other through pain, criticism and tears. It is not just during enjoyment, laughter and joyous celebrations you know true friends, but in moments like this.”

“Halima is one selfless, strong and sweet lady I know. She is a giver. I have yet to see a person that hides her pain just to cheer up a friend that is sad. If minding one’s business was a person, that would be Halima. However, don’t step on her toes. She is always there to give me advice.”

“Sinners judge sinners for sinning differently. Her only crime I guess is having the boldness to free herself by telling her truth. However, gullible people will rather ‘drag’ her instead of asking the right questions.”

Halima Abubakar has been allegedly sick for a couple of months and her social media pages are been handled by her sister who has continued to call out the cleric for ‘harming’ the actress.