“Oyedepo Sacked Me For Not Raising Enough Offering”.

In July 2021, an issue rocked the religious space in Nigeria as a Pastor, Godwin Onoruoiza, accused the Founder of Winners Chapel, Pastor David Oyedepo, of sacking him and 39 other pastors because they didn’t make enough money. Mr. Godwin Onoruoiza shared a post on social media including pictures of the sack letter sent to him. This aroused mixed reactions from Nigerians. Some people spoke against the dismissal, saying it was wrong to have sacked the Pastor. Other people felt that General Overseer was justified and could sack any pastor who wasn’t bringing in the required income.

Pastor Oyedepo reacted to the whole issue, responding that the sacked pastors were unfruitful and that there was no place for failures in his ministry.

However, a founder of a South African-based church has placed the sacked Winners Chapel Pastor on a 5 years’ salary of N100k per month. The founder of a church called Abba Father Ministries, Isaiah Okechukwu, promised to pay Godwin Onoruoiza for the next 5 years pending when he finds his feet. The church owner directed Pastor Oyedepo to learn the virtue of patience.

Pastor Isaiah shared a Facebook post confirming his pledge to Godwin. He spoke against the politicking and godfatherism in the church and went on to share a screenshot of his first payment of N100k to Godwin. 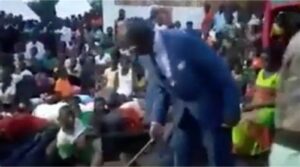 In October 2021, a video emerged showing a Cameroonian Pastor flogging some members of his church with a belt “to test to know whether they’re ready for the ministry”. The video sparked a lot of outrage on social media. It showed two pastors flogging their church members who were lying on the altar. The pastors moved from one person to the next, whipping the backside of the male and female members to test if they are ready for ministry.

Many people described the pastors’ act as an abuse of the religion, while others said that the church members were to be blamed for accepting to be whipped.

Plot twist: The choir members give a cool, slow rendition in the background as the pastors applied the belts to the backsides of each of the church members on the altar.

“My Conscience Can’t Hold It Anymore…”

Sometime in August 2021, a Nollywood actress, Chioma Ifemeludike, shared a post on Instagram. In it, she confessed how, in November 2016, she had an amorous relationship with the Senior Pastor of Omega Fire Ministries, Johnson Suleman. 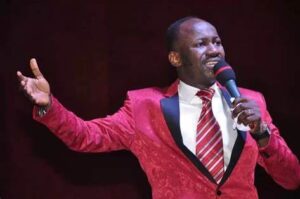 In her post, the actress claimed that she has slept with Mr. Suleman twice, and she was paid for it. She insisted that she had no idea that he was a popular preacher at the time the affair took place.

In her post, she said, “I’m sorry my conscience can’t hold it anymore. I encourage you to tell the truth as a mother and a Christian, to put the devil to shame and save millions of souls being misled. To my family and friends, I am sorry, don’t judge me. Please pray for me so the light of God will continue to expose every work of darkness in my life and the church of God.”

The actress decided to confess publicly because she said that her conscience continued to torment her, and she felt that she needed to make restitution for all the sins she committed against her body and the body of Christ.

Apostle Suleman later addressed Chioma Ifemeludike’s allegation, saying that it means nothing. On Sunday, August 22nd, Suleman told his congregation that he is not upset or discouraged by people who insult him on social media. He said that he could not be moody or distracted by the matter.

After her confession, there was a lot of backlashes, and Ifemeludike went off social media for a while. However, in an interview, Ifemeludike insisted that her open confession would in no way affect her plans to get married and start up a family.