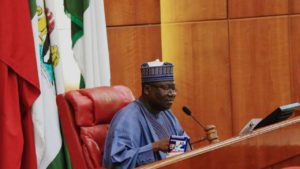 The Nigerian Senate approved seven new commissioners for the Independent Corrupt Practices and Other Related Offences Commission (ICPC), on Tuesday.

The names of the commissioners were submitted for confirmation to the senate by President Muhammadu Buhari.

This submission was following the consideration of the report of the Senate Committee on Anti-Corruption and Financial Crimes.

Chairman of the committee, Senator Suleiman Abdul Kwari, during his presentation of the report said the committee recommended the approval of the names.

When the nomination was put to vote, by the senate president, Ahmad Lawan, the senators approved and confirmed it.

READ ALSO: You Will Not Spend 8 Years On A Four-Year Course — Tinubu Promises Students