In line with the commitment of Lagos State Governor, Babajide Sanwo-Olu to decongest correctional facilities in Lagos State, 46 inmates have been set free.

The Lagos state government approved the release of 46 inmates and also adjusted the jail terms of six others that were on the death roll to life imprisonment in various correctional facilities across the State.

The approved release and adjustment in jail terms is coming on the recommendations of the Advisory Council on the Prerogative of Mercy brought before the governor’s table, which is hoped will allow the freed inmates to celebrate Nigeria’s independence with their loved ones.

The approval was contained in a statement released by the Ministry of Justice on Friday on its official social media handle.

He was said to have signed the release and committal orders on the 28th of September, 2022 in cognizance of the country’s 62nd Independence Day Celebration.

According to the statement, the exercise is under the provisions of Section 212 (1) (2) of the 1999 Constitution of The Federal Republic of Nigeria (amended). 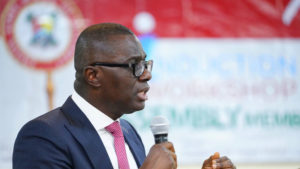 “The Advisory Council on Prerogative of Mercy in reaching its recommendations exercised due diligence in its deliberation of the applications in line with the applicable guidelines. The Council took note of the information provided by the correctional authorities, the nature of the offense, period of incarceration, age, health, and behavioral conduct of the inmates.

“The approval for the release of the inmates is in line with the commitment of Mr. Governor to decongest correctional facilities in Lagos State as part of the Justice Sector Reforms”.

Qatar 2022: Samuel Eto’o Apologizes, Opens Up On Fight With YouTuber