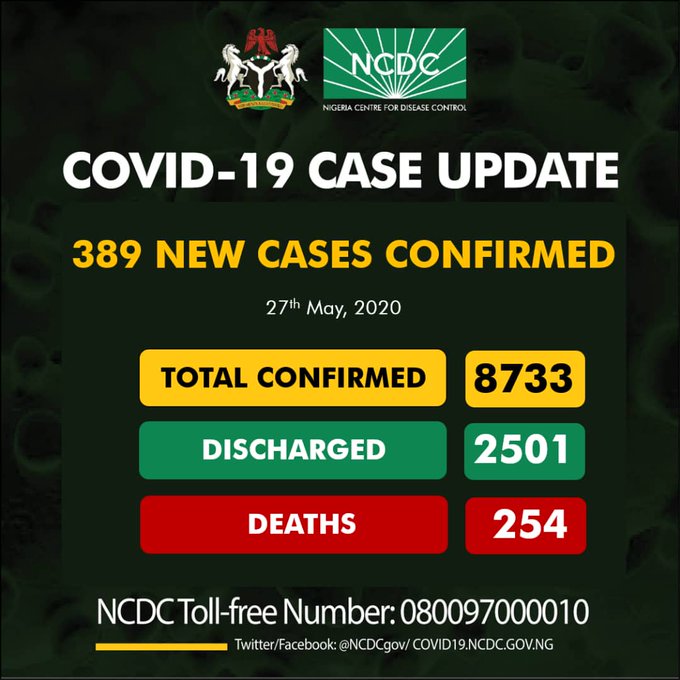 Kogi State on Wednesday, recorded its first Coronavirus (COVID-19) case, as the Nigeria Centre for Disease Control, NCDC, reported 389 new confirmed new cases, bringing the total of confirmed infections in the country to 8,733.

The figure recorded today (Wednesday) represent the highest daily cases so far reported since the beginning of the outbreak in the country.

The NCDC says one new state, Kogi, has reported a case in the last 24 hours.

The health agency said that this takes the country’s total infections to 8,733, out of which 2,501 have been discharged, with 254 deaths.

NCDC data showed that the cases were spread across 22 states and with Lagos accounting for the highest number of infections for the day with 256 cases.

The NCDC said that to date, 2,501 patients have been discharged and 254 deaths were recorded in 35 states and the Federal Capital Territory.

“This is consistent with the fact that risks are higher for those with other illnesses such as hypertension, diabetes and other chronic non- communicable diseases.

“There is a general reduction in mortality trend and continuous improvement in recoveries as shown in discharges compared to the increase in number of confirmed cases,” the agency said.

Nigeria To Receive 3.92 Million Doses Of COVID-19 Vaccines In July

(Video) #TwitterBan: Nigeria’s Actions Have No Place In Democracy – US

#KeepItOn: US Slams Nigeria’s #TwitterBan, Describes It As ‘Poor Message’