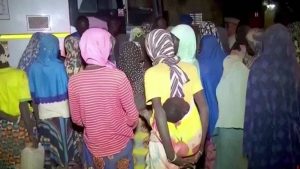 Security forces in Burkina Faso have rescued 66 women and children who were kidnapped by suspected jihadists.

The victims were kidnapped while gathering food for their families in an area hit by an insurgency.

They were reportedly found on a bus at a security checkpoint about 200km from where they were taken.

Local TV showed pictures of the children and women, some with babies on their backs, boarding a bus at an airport after being addressed by a military officer.

“They have found freedom after eight long days in the hands of their kidnappers,” the reporter says.

The rescued victims are now in the capital, Ouagadougou, where they are expected to be questioned to find out “more about their abductors, their detention and their convoy”, a security source told AFP news agency.

Roads in and out of the area have been blocked by militant jihadists leading to severe hunger as food supplies are limited which put the women and children in a situation to be kidnapped.