With a highly contentious goal, Japan came from behind to defeat Spain 2-1 and take the lead in Group E with Luis Enrique’s team needed goal difference to advance as runners-up ahead of Germany.

Japan had in their first match in the group shocked Germany 2-1 and were themselves shocked 0-1 loss to Costa Rica.

In Thursday’s last Group game, everyone expected Spain to win and top the group, but it was the Japanese that created the upset.

Japan’s turnaround was built on coach Hajime Moriyasu’s revamp of his side at the break when they were losing 1-0.

On came Ritsu Doan and within three minutes he hammered in a shot from the edge of the box which Spain goalkeeper Unai Simon – whose poor clearance had created the danger in the first place – could not keep out.

Three minutes later, Japan made it 2-1 and held on till the end. Kaoru Mitoma passed the ball to the feet of Ao Tanaka, who had an empty net in front of him and had no problem in tapping the ball in.

Japan defended resolutely for the remainder of the game, limiting Spain to very few clear-cut chances. The Blue Samurai held on for a famous win that put them into the knockout rounds of the tournament in first place. They will face another European side, Croatia, for a place in the quarterfinals. 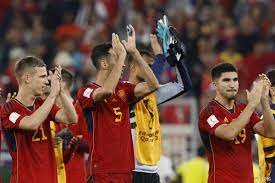 Spain joins Japan in the knockout stages by virtue of their vastly-superior goal difference over third-placed Germany. La Roja will now face Morocco in the Round of 16.

Germany suffered a second consecutive World Cup group-stage exit after losing to Japan, drawing with Spain and beating Costa Rica – but boss Hansi Flick was not prepared to blame their early departure on the controversial VAR decision.

“There are so many reasons but I am not looking for excuses,” he said. “In the first half I was disappointed and very angry at my team and how we allowed the opponent to come back.