Nigerian singer, Harrysong has reacted to the N500M lawsuit filed against him by music executive, Soso Soberekon.

It would be recalled that Soberekon dragged the Reggae Blues crooner to court after his interview where he claimed that he tried to kill him.

Read Also: Ayra Starr Reveals Why She Takes Her Family, Friends To Her Concert

Unbothered by the lawsuit, Harrysong took to his Instagram stories to blast the talent boss.

According to Harrysong, Soberekon is free to go and grant an interview so as to respond to his allegations.

“You dey sue me for social media. Dem ask you question? With ur small prick and flat blockus. Empty konkom. You go chi chun thin”. 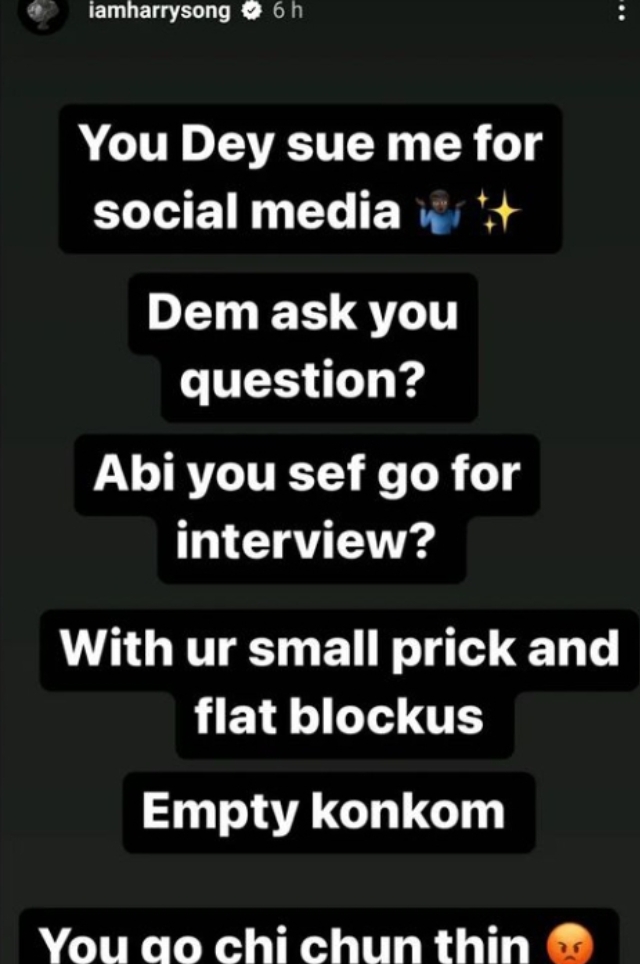 The drama started after Harrysong made an allegation against Soberekon during an interview on Frankly Speaking podcast hosted by Nedu.

In the interview, he maintained that most people seen as his friends are his real enemies looking for his downfall.

“90% of all the friendships are fake. There are people I’ve been working with for years. If you call their names you go say na Harry guy be this. Dem no be my guy,”

“As a matter of fact, those are my real enemies. If you see Soso now, you’ll say Soso is my friend. Soso is not my friend, Soso is my enemy. He sent people to come and kill me in Port Harcourt, no jokes. Ask my team, ask everyone.”