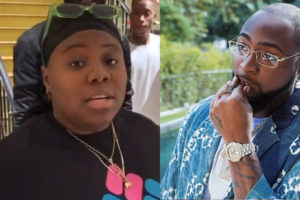 Security official had torrid time controlling the crowd as they battled to catch a glimpse of the Ace Musician, David Adeleke (Davido) one of the guest musicians at 2020 Access Bank Lagos City Marathon.

The “30 billion Gang crooner, Davido, had the last performance  to the admiration of the fans who but continued to ask for more.

Davido performed most of his hit songs, such as Chioma, 30 billion naira, E ma Dami Duro and others.

Before Davido came, the rave of the moment, Teniola Apata, popularly known as Teni, also dished out her numerous songs to entertain her fans.

Some of her songs included , Billionaire, For Your Case, Meyo and others.

The 31-year-old Kenyan long distance runner, David Bamarssai won the race with a  prize money of the 5th Access Bank Lagos City 42km Marathon with the time of 2;10:23

Others included, the Chairman Nilayo Sports, organisers of the event, Bukola Olopade, Director General, LSSC, Oluwatoyin Gafar among others.