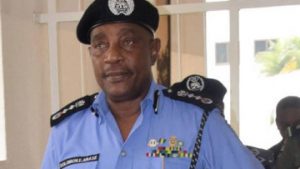 President Muhammadu Buhari has asked the Senate to confirm the former inspector-general for the top role at the police regulatory institution.

President Buhari wrote to the Senate seeking the confirmation of the appointment of former police inspector-general Solomon Arase as the next chairman of the Police Service Commission (PSC).

The request was in a letter addressed to the President of the Senate Ahmad Lawan and read during plenary on Tuesday.

The letter, titled: Confirmation of Appointment of Chairman of Police Service Commission, said: “In accordance with the provision of Section 154(1) of 1999. Constitution of the Federal Republic of Nigeria (as amended), I write to forward for confirmation by the Senate, the appointment of Solomon Arase (retd) Inspector-General of Police, as Chairman, Police Service Commission.

“It is my hope that the Senate will consider and confirm the appointment in the usual expeditious manner”.

The 66-year-old Arase was the Inspector-General from April 2015 to June 2016 when he proceeded on retirement.