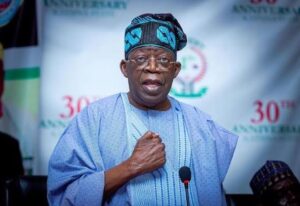 The Atiku/Okowa Presidential Campaign Organization warns the Independent National Electoral Commission (INEC) of plans by the Presidential Candidate of the All Progressives Congres (APC) Bola Ahmed Tinubu, to incite violence ahead of the 2023 elections.

This was revealed in a statement signed by the organization’s spokesperson, Kola Ologbodiyan, on Friday.

According to the organization, Bola Tinubu plans to disrupt the smooth conduct of the elections knowing there is no way he can win in a peaceful and credible election.

The statement partly reads, “The Atiku/Okowa Presidential Campaign Organization alerts our nation and the International Community of designs being promoted by the Presidential Candidate of the All Progressives Congress (APC), Asiwaju Bola Ahmed Tinubu, to incite violence and disrupt the smooth conduct of the 2023 Presidential election.

“This apprehension is heightened by the viral video making the rounds in which Tinubu, having been intimidated by the rising acceptance of the PDP Presidential Candidate, Atiku Abubakar, across our nation, and knowing that there is no way he can win in a peaceful and credible election, has directed his Party members to put aside decorum and deploy violence in the 2023 general elections.

“Nigerians were horror-struck to watch the deflated and demystified APC Presidential Candidate inciting his supporters by stating that “political power is not going to be served in a restaurant, it is not served a la carte. It is what we are doing; It is being determined; you do it at all costs; fight for it, grab it, snatch it and run (away) with it”.

“Tinubu’s directive that his supporters should “fight for”, “grab” and “snatch” political power with a confession that “it is what we are doing” validates apprehensions by Nigerians that the Tinubu/Shettima Presidential Campaign is behind the attacks on the campaign rallies of the PDP as well as the series of arsons on the facilities of the Independent National Electoral Commission (INEC).”