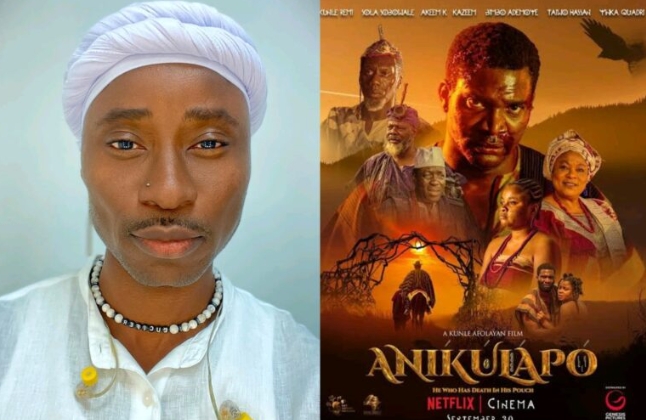 After it’s release on Netflix, the movie has been one of the most watched on the streaming app.

Not mincing words, Alimi rated the movie which was yanked off the nomination list of the Academy Awards, better known as the Oscars a 2/10 adding that the movie has potential but lost it within three minutes.

“What I have learnt from Anikulapo and many films like it is that Nigerians like bare minimums; you don’t even need to put in the effort, just the minimum with loads of shinning, and you are god!

“I am not critiquing the movie cos I want to be the odd one out, because tbh, that’s too much job with Nigerians. I am critiquing it because it has potential and it lost it 3mins into the film.

“First, that film has no business being 2hrs! Nigerian filmmakers need to stop that rubbish of pushing film to 2hrs and then filling it up with all the garbage in idumota.

“Many have argued the set design was unique; sorry, I didn’t see it. I guess what people mistake for the set is the camera. The film made use of good cameras, and it made the picture very clean; believe me, Tunde Kelani has been doing that for ages, nothing new.

“I was upset about the set portrayal of the Oyo empire. Which Oyo was that? Ibeju lekki oyo? And that bird? What was that? Not even in the days of Eye Jumijoke do we have birds like this.

“That brings me to the dialogue! Jeez! Nothing profound, nothing in depth, just basic. I think he was trying to avoid too much talking in the film, but then, there was less non-verbal acting, so the dialogue most times made no sense.

“And we can now ask the question about the story. What was the story about? If it was about a man who can wake the dead because of his encounter with death and the power he received, why didn’t he get the ability from the bird himself?

“Shola Shobowale did well; glad she was not typecast, but is she needed in that film? The answer is no. The Oyo palace story was to build up to explain why the Olori did what she did, why I get that, and why spent more than 30mins telling us.

“The ending? Does it mean there will be part 2? And how many times did he die in the film? I counted 3. Do they make any sense? The dying, I mean, cos the only death that has meaning to the film was the second one with the Olori.

“I am not here to spoil your joy, and I just wanted good films to come out of Nigeria. I do. As a graduate of theatre, it pains me when I see the bare minimum from people who can do better, and this is not about budget; I have watched movies shot on mobile phones and meagre budget telling a compelling story and great acting.

“Today is Monday, and I am not here for wawulence before you people will come and be attacking me; I am just sharing my opinion; you don’t have to agree with it. Peace!”