Nigerian actor and politician, Yul Edochie has revealed some vital information regarding his presidential ambition.

Taking to his Twitter page, the film star disclosed that he will no longer be running the presidential race under the All Progressives Grand Alliance APGA.

According to him, there had been series of meetings and consultations which came to the conclusion that APGA does not have the capacity to win a presidential election at the moment. 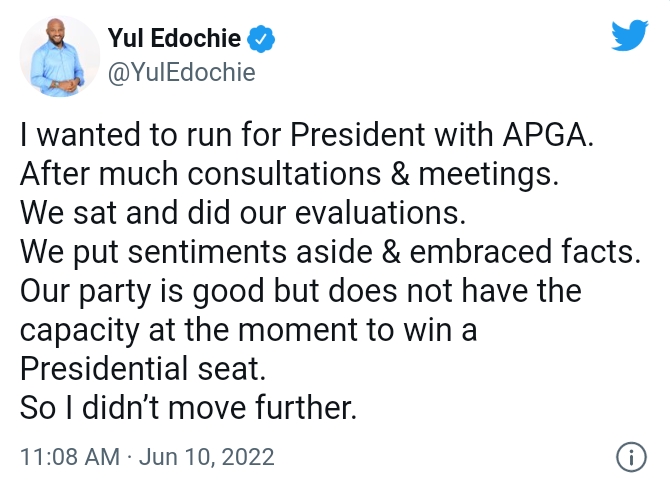 Read what some said:

ChineduPhilip13: “I guess you should have started with local government chairman.” Diplomatic1908: “But you already won a Presidential Election in Judy Austin now?”

LijokaO: Aside that,you don’t have the popularity across the 36 states in Nigeria,I bet people in katsina will think u are a spare part seller,use ur resources to support ur brother,PO, after all,only one ndigbo can be president. Thanks.”

Ecdomson11: “So your party need meetings and deliberation to realise wetin primary school child know. Una really nor get many capacity.”

Westruns: “Start small even House of Assembly. Then you can try Anambra governorship. Even Peter Obi we all want now was once a governor.”